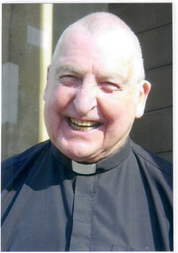 Evan, though of Welsh ancestry, was born and bred in London and his first memories are of living in the city during the Blitz. After apprenticing as a draughtsman went forward for ordination, training at St Michaels’s College, Llandaff.

Ordained in 1967, Evan served curacies in Churston Ferrers and Tavistock then became Vicar of Cornworthy and Rector of Ashprington, two beautiful villages outside of Totnes in Devon. From there he moved to London to long and fruitful ministries as Rector of St John of Jerusalem, South Hackney and then St James, Prebend Street in Islington. In retirement he continued to support a succession of parishes in Stepney Area, finally settling at St Clement’s, King Square, though his work as a Duty Chaplain at St Pauls’ Cathedral continued to give him much pleasure.

Evan brought out of a store of deep faith and joy great gifts as a pastor and teacher. He was a lively preacher and compassionate priest who, with a larger-than-life personality, touched many lives. He made and maintained many friendships throughout his life.

Grounded in the Catholic tradition of the Church of England, Evan had a wide-ranging knowledge of church music and liturgy. We will miss his beautiful singing voice. Rejoicing in the renewal of the Catholic Anglican tradition that came with liturgical change and women’s ordination, he was a founder member of the Society of Catholic Priests when those who welcomed the ordination of women broke with other priests’ groups, becoming the first Rector of the London Chapter of SCP. He will be widely and deeply missed, most of all by his partner of 40 years, Jacinto, and his nieces Rhonda and Caroline; but also by so many neighbours, former parishioners, and dear friends from far and wide. All of us are grateful for his friendship and his care.